On International Curlew Day we want to share awareness of this beautiful bird as well as ground nesting birds on farms such as Overbury's.

It is International World Curlew Day, about raising awareness of Curlews everywhere. Pamela Clarke, our Wildlife Surveyor has written this guest blog about our Curlews.

Grassland breeding sites for Curlew in the county (and many other areas) are nearly all gone now -  improved grassland no matter how lush does not suffice.  Ancient meadows with wildflowers and associated insects and invertebrates fed both the adults and juveniles until they were fledged and could leave the site for river valleys and ultimately estuaries to the south to winter.

Curlew are long lived birds, often 25 - 30 years, they pair for life and are highly site faithful for the whole of their lives. With Curlew numbers in deep decline once a pair dies this is often the end of breeding at a specific site, this is particularly true for out-lying dry grassland sites.

Curlews start to arrive at favoured breeding localities in mid February, they then become highly territorial from mid March, lay eggs in late April/early May and have chicks in late May/early June, fledging their youngsters in late June.  Nesting may have to be delayed when spring floods prevail (certainly in 2020).   This has become a more prevalent recent phenomenon caused by faster run off from agricultural land, new habitation, roads and industrial areas etc, this all goes to put extra pressure on breeding success rates.

Being ground nesting birds Curlews eggs and young are heavily predated -  by Rat, Fox, Badger even Hedgehog (if there)  but the greatest threats to their breeding success are large Gulls and Corvids, both groups being exceptionally clever.   As the spring has tended to come ever earlier over the last fifty years, silage and hay cutting is also carried out earlier, many hay fields are now cut in mid June, numerous partly fledged juveniles lose their lives in this fashion.

Curlews lay just one clutch - once a pair’s eggs or young have been predated the adults do not stay on, vacating the area almost straight away and certainly within 24 hours.  So, as a very loose general rule, if a pair is around in May then they are almost certainly sitting on eggs, if they are around in early June they have youngsters and if they are around at the end of June they have almost certainly got near fledged juveniles.

At Overbury, in the year 2017, we had at least 1 pair breeding on the farm in the vale. No records for 2018 but last year again we had a pair at least with 1 young.  It's supposition as there isn’t really enough data.  So, really they are just hanging on at Overbury which is probably a reflection of the general decline.

Pamela has shown how important raising awareness of not just the curlew of all our ground nesting birds. However, If we want to continue to have curlew, lapwing and skylark, as disturbance undoubtedly results in nest failures, it is very important to stick to public rights of way and keep dogs on leads. 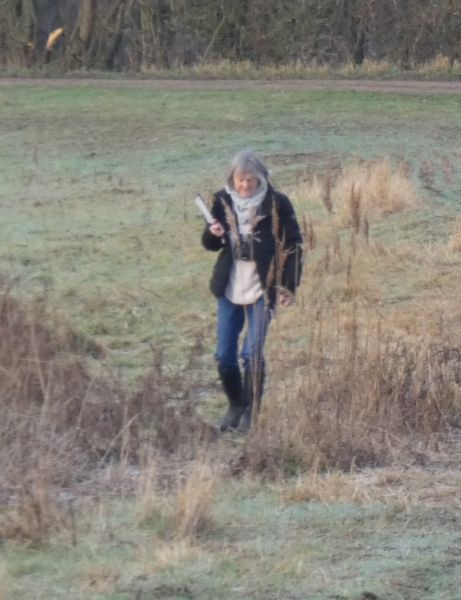 Previous Article Next Article All Articles